River Alliance relies on over 100 citizen-based river groups around Wisconsin to act as educators to their communities, watchdogs for pollution compliance, and to advocate for protective zoning ordinances. One such group, Petenwell and Castle Rock Stewards (PACRS), works to coordinate and facilitate a diverse group of people focused on improving the water quality and recreational experience of the Petenwell and Castle Rock lakes of the Wisconsin River.

“We are regular people who want to ensure these waters are protected for future generations. River Alliance helped us understand how to organize other concerned citizens.” —RICK GEORGESON, PRESIDENT, PACRS

“We are regular people who want to ensure these waters are protected for future generations,” says Rick Georgeson, a sailor and lifelong teacher who helped form the group in 2007 after becoming concerned about algae blooms. “River Alliance has helped provide direction and support to PACRS every step of the way,” says Georgeson, PACRS president since 2007. “They helped us understand how to organize other concerned citizens, how engage our legislators, and how to bring about positive results on the Wisconsin River.” 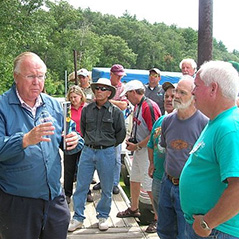 In an innovative outreach effort to policy-makers, PACRS created the popular “Politics & Pontoons” event, for which PACRS invite their legislators to see and smell the worst of runoff-fueled algae blooms for themselves on an August boat ride. When PACRS are asked difficult questions by lawmakers, they are ready to answer, largely due to River Alliance’s preparations and coaching. “Pontoons” is now a semi-annual event, and is widely credited with launching the largest water quality study in Wisconsin, on the Wisconsin River.

Perhaps most importantly, River Alliance and PACRS have worked together to create a new model for citizens’ advocacy groups in Wisconsin in which collaboration, partnership and open communication — including advocacy — form the core of how citizens interact with agencies toward a common goal.

“Attempts had been made prior to 2007 to bring attention to the Wisconsin River, and they failed for lack of citizen involvement,” says Georgeson. “River Alliance has helped PACRS, and other citizens’ groups, be effective advocates for the river.”