Toxic Taters? How a Determined Group Got a Potato Supplier to Change its Ways

Pesticide Action Network (PAN) is part of a global network working to protect public health and the environment from the harms of pesticides, and to promote ecologically sound and socially just food and farming.

PAN challenges the global proliferation of pesticides, defends basic rights to health and environmental quality, and works to ensure the transition to just and viable systems of food and farming. In Iowa, PAN is raising the public profile of the issue of pesticide drift through their Drift Catcher program, which trains farmers and others to monitor pesticides in the air with a simple device. At a time when farmers are increasingly concerned about the introduction of new drift-prone herbicides associated with Dow and Monsanto’s latest genetically engineered crops, there are now 25 active Drift Catchers in Iowa. This has set the stage to work closely with coalition partners in crafting a state policy platform to protect farmers and rural communities from pesticide drift.

PAN and other members of the Coalition and Food and Water Watch delivered 20,000 petition signatures to McDonald’s during the corporation’s shareholder meeting in St. Louis, Missouri. 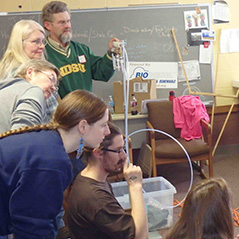 Conventionally-grown potatoes are one of the most pesticide-intensive crops in the Midwest. As documented in PAN’s 2012 report Pesticide Drift from Minnesota Potato Fields, drift-prone fungicides like chlorothalonil — which has been linked to cancer — are commonly found near homes in rural communities in northern Minnesota. In 2014, PAN’s Midwest Organizers Linda Wells and Lex Horan helped the Toxic Taters Coalition officially kick off its campaign of calling on McDonald’s to source potatoes from producers who don’t expose rural communities to fungicide drift.

PAN, Toxic Taters, and Food and Water Watch delivered 20,000 petition signatures to McDonald’s during the corporation’s shareholder meeting in St. Louis, Missouri. The effort succeeded in getting the Toxic Taters Coalition’s campaign squarely on McDonald’s radar. The Coalition also had a very public dialogue with RDO, the largest U.S. producer of potatoes McDonald’s primary potato supplier. In part due to this public pressure, RDO announced a move away from using chlorothalonil, a very drift-prone fungicide, and Minnesota officials have put the brakes on a proposed expansion of RDO’s potato production in the state.