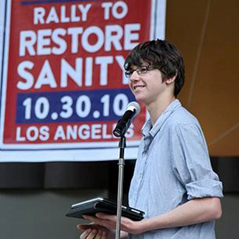 In 2007, then 13-year-old Alec Loorz was inspired to join the burgeoning climate change movement but had difficulty gaining a foothold due to his youth and perceived inexperience. So, he took matters into his own hands, created his own slide deck, and started talking about it… and talking about it. He’s now spoken to over 750,000 people around the world. Along the way he founded iMatter, an organization dedicated to giving a voice to the generation most affected by climate change. Now, with the help of The McKnight Foundation, iMatter is bringing a new youth-empowerment campaign to the Upper Midwest, and it is already seeing exciting results.

In response to the action of an iMatter team, St. Louis Park City Council passed a Climate Inheritance Resolution, committing the city to set aggressive goals to reduce greenhouse gases locally and have youth involved. Now, a plan to eliminate greenhouse gas emissions by 2040 (or get to “net-zero emissions”), is being developed and will be completed this spring.

“The time is now, to come together… to insure a livable future for us, for your children, for your grandchildren, and for the generations to come.”—ZOSHA SKINNER, ST. LOUIS PARK HIGH SCHOOL STUDENT

The passing of the Resolution was the culmination of the campaign that saw the students present more than 550 student petition signatures, accompanied by a Youth Climate Report Card. The students gave St. Louis Park an overall grade of B-; on a plan to combat climate change, the city earned a D-, as there was not a formal plan in place.

Key to the students’ success was re-framing the issue of climate change. Owen Geier, senior at St. Louis Park High School, urged the Council “to take action and become a leading city in developing a climate action plan that starts from what is scientifically necessary to preserve our future and not from what many may think is politically possible.” Zosha Skinner, also a senior at St. Louis Park High School, closed the initial meeting with city council by saying, “… the time is now, to come together… to insure a livable future for us, for your children, for your grandchildren, and for the generations to come.”

The team’s efforts received extensive local media coverage, including MPR, the Star Tribune, and Midwest Energy News. This coverage, coupled with other outreach efforts (presenting at the MN State Fair and numerous other speaking engagements) has helped the campaign spread. There are now campaigns underway in other cities in Minnesota, including Edina, Hopkins, Apple Valley, Eden Prairie, Stillwater, and Grand Marais. Elsewhere in the Midwest, there are active youth in Illinois, Indiana, and Iowa.