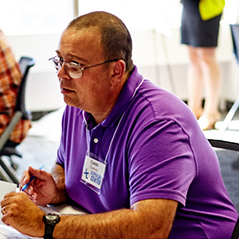 After a plot of land he sold lost nearly 90% of its trees in a hail storm, Caleb Tommila saw firsthand the effect global climate change was having on his community.

“My grandmother has lived in the area her whole life. She’s eighty-some years old, never seen anything like it. She doesn’t have a tree left on her property, because it was all older growth,” he said. “Basically, our little forested paradise is gone.”

Though Caleb knew about climate change, he felt like there was nothing we could do, “I was always just one of those who thought, “It’s too big of an issue. It’s happening. My hands are tied.”

Indeed, rural communities and their unique perspectives are often left out of climate change strategy conversations. Policy changes to mitigate and adapt to climate change’s effects tend to emphasize urban and suburban perspectives. But it doesn’t have to stay this way.

For rural people around the world, workers in a natural resource economy, climate change is an issue of livelihood and democracy. Contrary to widely held opinions, rural people will be most disrupted by a failure to address the effects of climate change. Rural residents have the potential to maintain vibrant, resilient communities by developing innovative solutions that work for rural areas. For the last two years, the Institute for Agriculture and Trade Policy (IATP) and the Jefferson Center have been pioneering a new way forward in rural engagement on climate change.

Policy changes to mitigate and adapt to climate change’s effects tend to emphasize urban and suburban perspectives. But it doesn’t have to stay this way.

The Rural Climate Dialogues use the innovative and time-tested Citizens Jury method for community problem solving and leadership development. Each Dialogue focuses on a specific rural community and gathers a randomly selected but demographically representative group of citizens for a three-day moderated study and deliberation forum. They are tasked with creating a shared, community-based response to climate change and extreme weather events. The panelists have the liberty, information, and resources to produce their own recommendations that respond to community needs, priorities, concerns, and values.

With funding from the McKnight Foundation, IATP and the Jefferson Center have held dialogues in Stevens, Itasca, and Winona Counties, representing distinct rural areas of Minnesota. In September of 2016, they brought participants from all three areas to St. Paul to build relationships with state agency staff to integrate the state’s resources into their local response plans.

In 2017, the second phase of this work begins as they work to turn the recommendations of the citizen juries into actual public policy in the three areas — a process that will engage lawmakers, agency staff and the broader community to put in place local solutions that work for people and the planet.

Bringing People Together to Build a Clean Energy Future in Minnesota