Diane Henry Freutel of McHenry County, Illinois recently inherited over a hundred acres of farmland along with several other properties. She never dreamt she’d be the last living family member and when her brother and father passed away in short succession, she felt overwhelmed and lost amid all of the information, programs, and decisions required of her for their farmland. She thinks her experience at a July Women, Food and Agriculture Network (WFAN) meeting in Woodstock, Illinois came at the exact right time to open her eyes to the reality that she is not alone.

Since women own or co-own as much as half the agricultural land in the Midwest, it is imperative to reach that often under-addressed clientele. 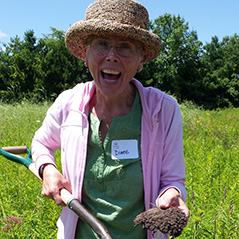 Other women are walking that same walk. The experience helped give her confidence and assurance as she navigated these changes in her life.

Women, Food, and Agriculture Network is busy working with women like Diane across the Midwest to help build relationships with local conservation professionals who will then be able to help landowners nurture their land. The programming, called Women Caring for the Land, has been funded by grants from the NRCS and other agencies. McKnight’s Mississippi River program provides funding to WFAN to encourage participation in such conservation programs.

In 2014, WFAN, in association with local partners, convened meetings in seven states to promote soil health improvement. Working closely with the local experts, WFAN demonstrated the principles of soil structure and function and the benefits of cover crops to improve soil viability and production. Most soils in the Midwest have been seriously degraded over the past 75 years, but new information about successful methods to rebuild soil is very encouraging. The challenge is getting the word out to farmers and landowners. Since women own or co-own as much as half the agricultural land in the Midwest, it is imperative to reach that often under-addressed clientele.