Could Family Farmers See a Brighter Future with Clean Energy?

Farmers have always been innovators. From harnessing the wind to pump water or mill grain, to harvesting the sun to dry hay, farmers have long relied on natural resources to lighten their workload.

Now with increasingly affordable technology from wind turbines to solar panels, farmers across the state of Minnesota are taking renewable energy to the next step. By installing small distributed generation systems, many farmers, ranchers and rural landowners are harvesting enough electricity to power homes, light barns, cool dairy cows, and refrigerate meat processing — all while lowering lifetime energy costs on the land they own.

Does renewable energy have the power to provide a more sustainable future for Minnesota farmers? That’s the question the Minnesota Farmers Union is now exploring with its nearly 14,000 members across the state. The progressive member-supported farming advocacy organization, in partnership with the McKnight Foundation, is leading a series of listening sessions and workshops to learn more about how Minnesota’s more than 70,000 farm operations are using renewable energy—and where they may need more resources and policy solutions.

Under the state’s net metering law, Minnesota farmers can deploy wind turbines, solar panels and other distributed generation systems under 40kW, which can harvest enough power to serve the annual energy needs of four American households. Farmers can direct the energy where it’s needed for their own agricultural operations, or sell the surplus energy at a retail rate to rural co-ops and other electric providers in their communities.

“This may seem like a new arena for agriculture, but farmers have always been early adopters of technology,” says Bruce Miller, MFU’s director of membership. “We come from a heritage of making things work.”

By 2020, the U.S. Department of Energy predicts that wind energy alone could help farmers and rural landowners reap $1.2 billion in new income. 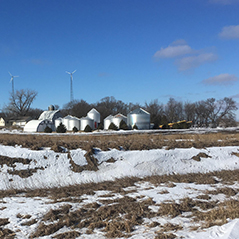 With historic roots that go back to the turn of the 20th century, the Minnesota Farmers Union is making renewable energy one of its top policy priorities. You can see the evidence right on the roof of the Farmers Union’s new St. Paul headquarters, which now includes a small array of solar panels that provides for a portion of the organization’s energy costs, and serves as an open-air classroom for members curious about implementing renewable energy on their own property. In some parts of the country, renting land to solar energy suppliers is worth three times the yield of standard crops. By 2020, the U.S. Department of Energy predicts that wind energy alone could help farmers and rural landowners reap $1.2 billion in new income.

“With milk at historically low prices, dairy farmers are looking for new ways save money and keep energy costs from growing through the barn roof, so the addition of renewable energy generated on farms can help to reduce this cost, and keep their farms in the family,” says Miller. “Harvesting the wind or solar energy could be another cash crop that can make a big difference in rural communities.”