“Everyone wants to feel good about using more renewable energy, but if you’re low-income, you just don’t have the option of saying ‘I’m going to invest in solar because it will pay off in 20 years,’” says Brandy Toft, Environmental Deputy Director for the Leech Lake Band of Ojibwe in northwestern Minnesota. “When you’re struggling, your only focus is on how you’re going to make it through this one year.”

That’s why the band is joining forces with the state of Minnesota, the McKnight Foundation, and other funders to plant the first-ever community solar garden to benefit a tribal community: a $500,000, 200kw array of solar panels with the capacity to power up to 100 homes on the Leech Lake reservation. Built by Renewable Energy Alliance, the Leech Lake array is Minnesota’s first low-income community solar installation, and the latest in a long list of more than 500 solar solutions that the Backus, MN nonprofit advocacy group has installed at no cost for low-income families in the region. Once it’s fully operational, RREAL will donate the solar garden back to the tribe to help offset the costs of the community’s own Energy Assistance program.

“Solar energy should be more accessible to more people.” 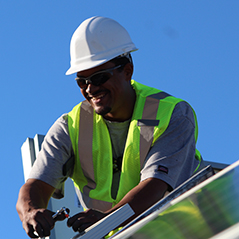 “Solar energy should be more accessible to more people,” says Jason Edens, executive director of RREAL, which sees solar energy as part of the solution for the nearly 33 million Americans who live in “energy poverty,” a term to describe low-income families facing fuel bills that burn up to a fifth of their annual household income. While Energy Assistance can help qualified families fill the gap on missed utility payments, investing in more renewable energy options could help low-income families lower their fuel cost while providing better returns on public dollars. In fact, with just 40kW of solar panels operating on the Leech Lake reservation in November 2016—just one-fifth of the finished plan—Toft says the tribe generated $100 toward the community’s own Energy Assistance programs.

If Leech Lake’s solar garden succeeds, RREAL’s solar solution could be a model for other communities struggling with energy insecurity. Renewable energy in northern Minnesota may also help buffer low-income families against market volatility from other fuels, such as the propane shortage that hit Minnesota’s rural households especially hard during the winter of 2014. “Low-income families are the most vulnerable when the market’s under pressure,” says Edens. “We can’t predict when the next crisis is going to be, but we can say that clean energy is a hedge against uncertainty.”