A recent production of Alice in Wonderland was one of the grandest, most ambitious, most multi-faceted, and creative endeavors ever undertaken by the Flying Foot Forum. It was a successful performance and event, delighting audiences who became a part of it over its three week run in downtown St. Paul. It made City Pages list of Best Theater of 2014 and garnered critical praise.

People were immersed in Wonderland and could choose where they wanted to go and from what vantage point they would experience the show.

The production itself was unlike anything that founder Joe Chvala had seen or heard of. It pushed him – and the entire company – into whole new ways of thinking about performance and how it relates to the ideas of “event” and “community.” It was participatory, immersive; it moved from place to place, even starting in a public foyer and extending through a hallway to the Wonderland world they had built from the ground up. Once inside the performance space, the spectacle occurred all around the audience. People were immersed in Wonderland and could choose where they wanted to go and from what vantage point they would experience the show. 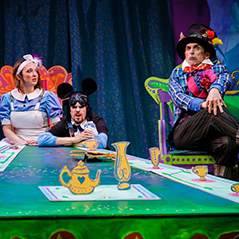 Another unique part of the show was the participatory aspect. Flying Foot Forum involved community members and students from four different St. Paul public schools who had pre-learned sections of the show that three to five of them would perform on their assigned nights —approximately 50 students total in the 21 performances. Another 400 students from the Saint Paul Conservatory of Performing Arts saw the show in special school performances.

Flying Foot Forum, a McKnight Arts program grantee, is dedicated to expanding the definition and the applications of percussive dance. They aim to tell unusual tales, creating a wild variety of characters and exploring universal ideas in inventive and exciting new ways. In recent years, the company has concentrated on artistic and choreographic collaborations. The company performs full-length pieces on tour and leads residency activities all over the state of Minnesota for people of all ages and dance abilities.