Inspiring Action on Climate Change, from Citizens to Policymakers

Climate Generation: A Will Steger Legacy

For the past decade, Climate Generation: A Will Steger Legacy has been empowering individuals and communities to engage in solutions to climate change, and the results at the state level are telling. Today, Minnesota generates over 20 percent of its power from renewable sources, and is now home to the largest solar installation in the Midwest — the recently completed North Star project. Through their public engagement and youth leadership programming, Climate Generation has helped build durable public will for clean energy and climate policies, such as the Next Generation Energy Act — turning 10 in 2017 — and a solar energy standard.

Will Steger’s eyewitness testimonies inspired over 60,000 Minnesotans to take climate action in their homes, workplaces and communities. He has also inspired decision-makers from Minnesota to the U.S. Congress to make climate change a priority. 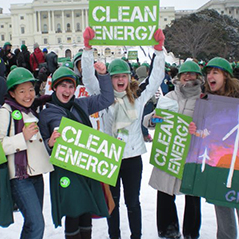 Supporting educators, youth, and the public to act as agents for climate solutions has always been core to Climate Generation’s work. Will Steger’s eyewitness testimonies inspired over 60,000 Minnesotans to take climate action in their homes, workplaces and communities. He has also inspired decision-makers from Minnesota to the U.S. Congress to make climate change a priority. Today, they continue to work with individuals to share their climate stories, to commit to meaningful, locally-based solutions in their communities, and to effectively advocate for meaningful policies at the local and state level.

In 2014, Climate Generation launched an innovative public engagement project called Climate Minnesota: Local Stories, Community Solutions. The stories they’ve gathered from Minnesotans of all ages are empowering and inspirational tools that are helping them to build a stronger climate movement.

The power of community-based solutions to climate change should not be underestimated. Cities with ambitious climate policies serve as models of sustainability for the world. Minneapolis, for example, has adopted a goal of 80 percent emissions reductions by 2050 or sooner, with a Climate Action Plan in place to guide its operations. At Climate Generation’s Climate Minnesota convening, the mayor of Rochester issued a proclamation to pursue a goal of 100% clean energy by 2031.