The First Farmers Market in Minnesota to Accept SNAP

The Corcoran Neighborhood Organization (CNO) came into being in 1975 through a grassroots effort by neighborhood residents to establish Corcoran Park on the site of a closed school. Building on this victory, CNO has continued to unite and equip neighbors to improve and protect the neighborhood. CNO serves as a nonpartisan information source, spokesperson, and advocate for the community on civic affairs, and strives to engage community members on issues that may have a positive or negative impact on the community. CNO unites neighbors to strengthen its community, envisioning the community as a place that fosters leadership, engagement, and a sense of belonging. 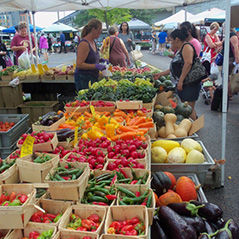 In 2002, the Minneapolis City Council adopted the Corcoran Midtown Revival Plan, a CNO-led Small Area Plan that originated the idea of holding a farmers market in the neighborhood. The Midtown Farmers Market has been citizen-built and citizen-run from the beginning, with over 12,000 volunteer hours sustaining the initiative since 2003. The market has 48 market days per season, with 85 vendors and over 60,000 customers. At the center of the Corcoran Midtown Revival Plan is a commitment to local growers, local artists, and underserved neighborhoods. The Midtown Farmers Market was the first in Minnesota to accept SNAP-EBT, leading to 632 new patrons in 2012.