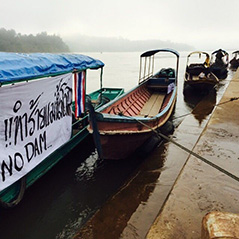 International Rivers’ work is at the heart of the global struggle to protect rivers and the rights of communities. They work with an international network of dam-affected people, grassroots organizations, environmentalists, human rights advocates, and others who are committed to stopping destructive river projects and promoting better options. International Rivers seeks a world where healthy rivers and the rights of local communities are valued and protected. The focus of their work is in Latin America, Asia, and Africa. Within McKnight’s Southeast Asia program, International Rivers has received project funding for their work on the Mekong River.

The Mekong River supports the lives of over 60 million people in Southeast Asia. As the world’s largest inland fishery, it provides food security and an important source of protein. The highly productive agricultural and rice fields of the Mekong’s floodplains and delta depend on the nutrients that the river transports down from the north. The four governments of Cambodia, Laos, Thailand, and Vietnam are planning to build eleven large dams across the Mekong River that will directly threaten the food security of over two million people. International Rivers has helped lead a civil society movement, called the Save the Mekong Coalition, which has encouraged the region’s governments to abandon plans to build hydropower dams along the Mekong River. To do this, the coalition has worked to raise public awareness of the dams’ impacts and has informed government officials in all four countries of the implications of these dams.

Unfortunately, in November of 2012 — despite longstanding criticism and efforts of organizations like International Rivers — governing bodies in Laos and Cambodia approved, respectively, the construction of the Xayaburi and Lower Sesan 2 dams. The construction of these dams will threaten the livelihoods of hundreds of thousands who rely on the healthy and integrity of the fish population of the Mekong River.